Shocking Shadow Pigments from HIP by L'Oreal: On Clearance at CVS!

Here with another quickie review of two colors of the Shocking Shadow Pigments from L'Oreal's HIP (High Intensity Pigments) line- think their version of MAC- which are on clearance right now at CVS. Bear in mind, only some of the colors I saw were on clearance. The two I nabbed were Exciting, an ivory with a pink flash, and Unashamed, a metallic burgundy with some copper undertones. These are loose pigments meant to be used as eye shadows; like all loose eyeshadow, there's going to be a fallout issue, but these were surprisingly creamy in texture, so I don't think you'd have the same amount of fallout as you would with a powdery pigment. These were originally $11.99, but I got both of mien at 75% off, bringing them down to about $2.99. Honestly, I think the brush they come with is alone worth $2.99; it's pretty good! It's got a short little handle and a plastic cover that makes it great for travel, and it's surprisingly plush and soft for a brush included with a product- drugstore or not!

So, without further ado, here are some product shots of the Shocking Shadow Pigments in Exciting and Unashamed, from L'Oreal's HIP line. 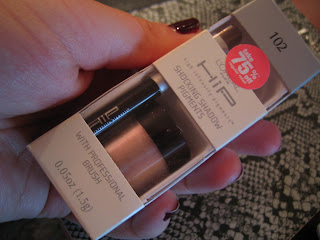 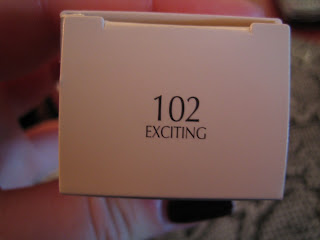 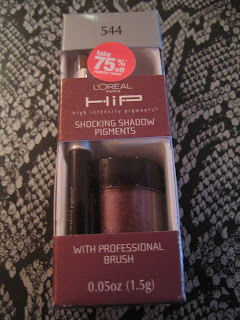 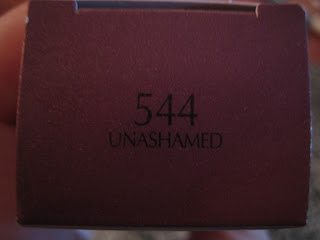 It's a pretty sturdy little jar! It's all plastic, but it seems to be put together pretty well; none of it had leaked out before I opened it, and it was sealed on the inside as well as being packaged in the little box. 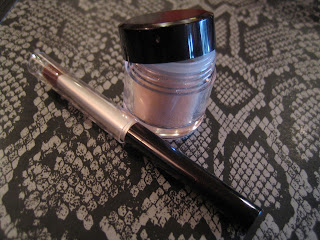 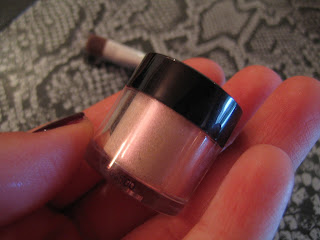 And here are the swatches; on the top is Exciting dry and then wet, and on the bottom is Unashamed dry and then wet. You can't see much of a difference in finish in these pictures between wet and dry; coverage was about the same, but they looked more shimmery dry and metallic wet. It was hard to capture Exciting's color in the photos because it is so pale; it's not exactly sheer, and seems to have a duochrome effect between an off-white and pink.
You can see the actual finish a little better in the picture with the flash, even though you lose Exciting's pink glow:
Because I've only swatched these and not used them on my face, I can't assign a rating, but so far these seem pretty impressive! I think it's definitely worth the $2.99 gamble if you're at all interested in the colors.
Posted by Sarah at Tuesday, January 11, 2011