This next product I have to show you is the Physician's Formula Eye Definer in Ultra Black. It's a mechanical eye pencil with a built-in sharpener... but NO CAP. Is mine a freak? Did I get one that had been tampered with? I don't know, but when I took it out of the package, there was no cap. This is unacceptable, in my view; I can never take it on vacation or put it in an overnight bag. That also seems really unsanitary. I'm so mad, I may go complain to CVS and see if they'll take it back or switch it out for me. We'll see. Other than that (which may just be mine), this seems to be a pretty nice, basic black eyeliner. No tugging, it's smudgeable, but if you don't smudge it, it's a really nice, deep black. It seems to be a true black, too- it doesn't lean too blue or brown. This was originally $5.99 and at 75% off, I got it for a very reasonable $1.59. If this had a cap, that would be a steal for this product. Even without a cap, I may choose to use saran wrap or something make due. If you decide to nab this, just make sure you squish the plastic around the top of the pencil to see if yours has some sort of a plastic lid! Maybe it was supposed to be in the large box, not visible through the plastic, but mine slipped out? Who knows.

The package is really large, even though the pencil itself is average sized. Which seems like a waste, but there's actually a lot of information on the package, so I included some of it here. 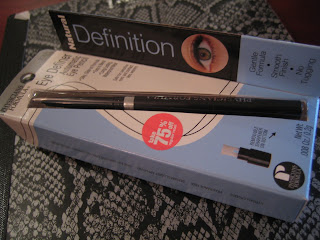 For instance: this is apparently waterproof (it washed off with soap and water, but it didn't wipe off very easily; I'd say it's comparable to the Urban Decay 24/7 liners in how it washed off). It also claims to be safe for those with sensitive eyes (me!) and contact lens wearers. 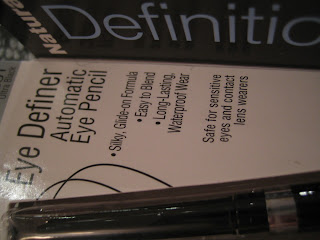 This picture is probably too small for you to read the entire back of the package, but you can see that it comes with suggestions for how to line your eyes. It's all stuff you could find online, or probably know already if you've been using makeup for a long time, but I think this is a nice touch, anyway, that I wish more companies would include. The package does specify that this is NOT waterline safe. 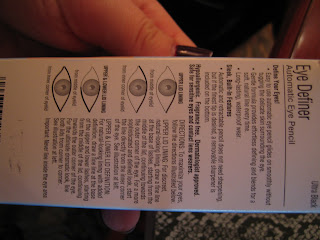 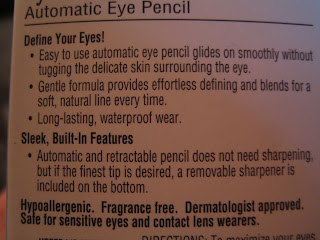 And here's the pencil! Capless (grrr) but otherwise intact. It's a plastic tool with a twisty function that pushes the eyeliner up. The bottom of it pops off, and there's a little sharpener down there. 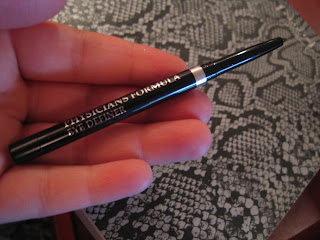 You can get a medium-precise line with this. On the right I have a thick, dark line (this was a couple of swipes just to see how dark I could get it, although one pass is fairly dark anyway), and the left is one pass that I smudged. 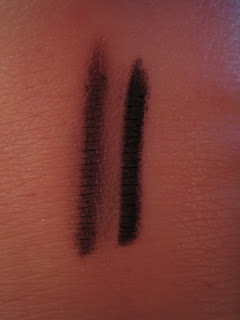 Like the rest of these CVS clearance reviews, I'm not actually rating anything since I haven't had a chance to try them out and test them thoroughly, but these are crazy bargains and they're going fast! If you need a really black eyeliner, this is great; the packaging is nicer than your standard pencil, and the built in sharpener is really convenient. However, make sure yours has a cap! If none of them have a cap, this is cheap enough that you may choose to just use foil or saran wrap to keep this sanitary, and just keep it in your brush holder or something, but I think that I'd personally pay a little more for one I wouldn't have to fuss with like that. If you're on a really tight budget, though, this isn't a bad option! It's definitely darker than a lot of "black" eyeliners.
Posted by Sarah at Tuesday, January 11, 2011