So, if you have been following this blog for awhile and paying very close attention, you probably know of my reverence for (read: idolization of) Bette Davis. I think the woman is possibly the best actress we've ever seen on the silver screen, and I love her unique beauty. I even cited her as one of my fashion icons in this post.  So, it's only natural that I would want to do a look inspired by her. I've been having a bit of a relaxing break this week, so I've been playing around with makeup when I don't have to go out; I thought it was high time to have a go at this! Now, this is only my first try, and I can totally see this being a look that I'd like to perfect. But overall I'm pleased with the way this turned out!

I've gathered a few pictures of Ms. Davis throughout her career for reference. Shall we have an ooh and aaahhh over them? She started making films in the late twenties and continued working up through the eighties. Most of the films (and fashions) that are my favorites of hers are from the late thirties and the forties. She's known ignoring her cupid's bow and painting her lipstick straight across her upper lip, and her big, dramatic eyes.

Ok, that last one was a joke!

With all of this black and white, I had to decide which colors I wanted to go with in my interpretation of her makeup; I decided to go with orange tones and warm browns, as a nod to her fiery personality! However, having made this decision, I immediately want to go back and do a version with a cooler red lipstick and smokey greys and cool browns. Because my favorite films of hers are from the late thirties and the forties, this look is meant to evoke that era more than the harsh 1920's or pinup 50's. I drew inspiration from the film noir atmosphere, too! I focused on creating a heavy, uniform canvas on my skin to emulate the heavier foundations of the era, and I concentrated eye color narrowly in the crease and in eyeliner. Anyway, I'm getting ahead of myself, here's the look!

First off, the goods:
They don't look particularly retro, but they'll do for now! 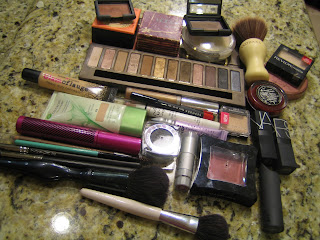 Face: Covergirl Natureluxe Silk Foundation applied fairly heavily, with Hard Candy Glamoflage used to provide extra coverage on cheeks (to hide my natural blush!), around the jawline, across the nose, on the eyelids, and under the eyes. This gave me a pretty uniform pastiness! Then Physician's Formula Color Correcting Powder in Translucent was dusted lightly all over the face with my EcoTools finishing kabuki brush. I used the same brush to dust Benefit Georgia on my cheeks and up to my hairline, and then with the same brush, I put Benefit Hoola on the sides of my face to deepen the shadows. I used my fluffy Sonia Kashuk blush brush to lightly dust Tarte Amazonian Clay blush in Explosed on the cheeks, and then I used the tiny blush brush by Sonia Kashuk to put Illamasqua Powder Blusher in Beg on the apples of my cheeks, pulling the color back toward the hairline.

Eyes: I used Urban Decay Primer Potion on my eyelid, then with the MAC 226 I dusted WnW eyeshadow single in Brulee over the entire eyelid. From the UD Naked Palette, I put Naked on the lid, and Buck into the crease with the same 226 brush. I followed that by adding some e.l.f eyeshadow in Pebble in the crease. L'Oreal Infallible Eyeshadow in Continuous Cocoa was focused on the very deepest part of my crease with the MAC 219, and then I used Revlon's Vintage Lace as a highlight under the brow bone and dusted lightly around the edges of the eyes. NYX Jumbo Eyeshadow Pencil in Yogurt went on the inner corner. I used the 226 again to put just a little bit of NARS Lola Lola on the corner of my eyes. I lined my top and bottom lashes with UD's 24/7 liner in Corrupt and smudged it with the 226 brush, avoiding the inner eye. I finished it off with Prestige My Biggest Lashes mascara in Very Black on top and bottom lashes. Obviously I don't have the thin, curved brows that were in vogue during this period, but I filled them in with Prestige Brow Perfection pencil and shaped them with the spoolie on the back of the pencil and Anastasia Brow Gel in Caramel, trying to de-emphasize the arch.

Lips: I used a Sephora lip pencil in Real Red to line and fill in my lips, overdrawing the lip a bit and de-emphasizing the cupid's bow. And here's where the crazy sets in... I couldn't find the perfect deep orangey-red lip color in my collection so I decided to layer colors until I got the shade I wanted. I can't tell you how much of any one color went into the end result, but I used a lip brush and applied some unholy combination of Bite lipstick in Apricot, NARS lipstick in Joyous Red and Viridiana, and Bobbi Brown Pot Rouge in Chocolate Cherry. And I re-drew a freckle by my lip that had been covered up by the heavy foundation and concealer with the UD 24/7 liner in Corrupt. I felt like I needed to play that up as a beauty mark, given the look I was trying to evoke!

So there you have it! Would I do it again? Yes! I actually really like this look! I think I'd update it a little bit to wear it out, though; I'd probably use fewer lipsticks, not overdraw the lip line (or add the beauty mark, hah!), soften the foundation, and blend the crease color a little more. I might also add a bit of shimmer, either as a cheek highlight or somewhere on the eyes, to make it look a little more modern, a little less like stage makeup. But I had a lot of fun with this, and hope to do more vintage and retro-inspired looks in the future! (that sounds like the beginning of a time paradox...) I am thinking about doing a similar look for a party on Saturday, I'll let you guys know what I end up doing!