I realized I've had these photos on my computer since August and I never got around to writing up this post! You may remember that I picked up NARS' Velvet Matte lip pencil in Train Bleu when I was in Las Vegas; it was released as part of their Fall 2011 collection, but is now part of the permanent collection. It is available through NARS' website, and is $24; they come with .086 ounces of product. For a more detailed explanation of the texture and packaging of this formula, you can go back and see my review of Damned; however, I'll give you a rundown of the basics. The formula is creamy and non-drying, despite being a truly velvety looking matte lip color. This is, hands down, one of my favorite matte formulas (another stand-out being Revlon's matte lipsticks...). However, the packaging could use some work; the two major drawbacks are that you lose product when you sharpen the pencil, and that the cap has a penchant for popping off (especially in my purse...) when it's jammed on too quickly. You kind of have to ease it back on and then watch to see if it settles up higher than where you pushed it too. If not, you're safe! I wish that NARS would re-release these as a twist-up automatic pencil, but the formula is so creamy, I wonder if a stick of this would even hold its shape without the support of the pencil.

Moving on, Train Bleu is a very dark eggplant purple, much cooler than a lot of these deep blackberries that we regularly see. It's a bit of a tricky color since it's so dark; I find that this shade emphasizes any imperfections on the lip or in application. Worn as intended, it is a completely opaque shade; however, it's just as lovely (and more wearable) blotted to a sheer stain. 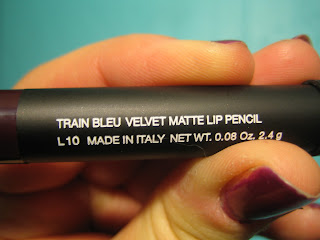 Worn sheer with clear gloss over it!


What do you guys think of this? I love having this shade, I wore it constantly for about a month, and now I haven't touched it in probably two months. Doesn't it always happen that way? It's so much fun to wear, I'm sure it'll wind up back in the rotation sooner or later. It's definitely not a perfect product, but I'm very fond of it and would recommend it to anyone who wants a lip product in this shade, as long as they're willing to give their lips some tlc before wearing it.
Posted by Sarah at Sunday, January 15, 2012