As you may recall, I went to Las Vegas in August. I bought a lot of makeup while I was there. Here is my haul! 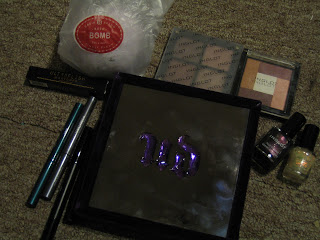 I became the proud owner of a bath bomb (which I still haven't used! I finally have a bathtub to use it in, though!), Inglot Highlighting Powder in 89 (I use it as a blush/ bronzer), two Inglot nail polishes (the previously reviewed Inglot 964 and a flakie), NARS' Velvet Matte pencil in Train Bleu, four Inglot eyeshadows (dang it, I can't seem to get them out of the palette without damaging them to tell you which shades they are... Let me work on that, I'd like to do a review of them at some point), Urban Decay's 15th Anniversary Palette, and two of UD's new liquid liners in Siren and Revolver. I also got a sample of UltraFlesh's mascara, which I actually really like!

Not pictured is an Inglot lip pencil in 19, which is a kind of brick/coral color.
Posted by Sarah at Tuesday, December 06, 2011