I honestly haven't been this excited about an eye shadow formula in a long, LONG time. Have you guys seen these things yet? They're awesome! I hear they've been out in Canada for quit awhile now, but I've only seen them pop up at my local Bed Bath & Beyond, and they've only been there for a couple of weeks. I suspect we'll see them appear at drugstores in the next month or so as they clear out the holiday displays.

So, these claim to be 24 hour eyeshadows... I can't say I've tried that, but I've been wearing the first shade I bought, Bronzed Taupe (890) fairly frequently without any kind of base, and the only time I had any sort of creasing was when I used it sheer on the lid with a different formula of shadow blended in the crease, so I suspect throwing a different formula into the mix (and in my crease, no less) was what caused the issues, so I don't know that this would work as a base for other shadows. Otherwise, I get a full day of wear with this looking shiny and beautiful by the end of the day, no creasing. That being said, I think that I may like using these over a base better than on a bare lid, simply because the base provides a smooth and uniform surface for the shadow to sit on, and helps cancel out the color of my skin, giving me a brighter, truer shadow. A base is completely unnecessary if you're only worried about fading and creasing, though.

The formula itself seems to be a loosely packed powder with a tendency to crumble apart, but not in a dusty way. It's like it's a little bit moist... and it is such a creamy powder! These are all densely pigmented, too. The jars come with a little stopper to help keep the product packed down so that it doesn't crumble in the jar and make a mess everywhere, with the shimmerier shades being more prone to this crumbling action than the satin shades. However, I haven't had any of mine get crazy crumbly; just a  few areas around the edges maybe, or places where I dig up a little with my nail. Why would I dig these up with my nail, you ask? Well, I apply these with my finger to get a really opaque and dense wash of color, but they blend out like crazy so they end up covering a much larger area than the place where you actually put them down. Which is awesome, actually; you can do a solid wash of color and get it sheer around the edges. However, it's so pigmented that if I just want to place a little bit of dense color in one area and not blend out, I find scraping a tiny bit up on my nail and placing it where I want it on the lid so that it will be the right size once it's mashed down is the best way to do it. Incidentally, the packaging on these looks a lot like the Armani Eyes to Kill eyeshadows, and they seem to be very similar in texture and consistency, although I've only swatched the Armani shadows at the counter, and not since I've worked with the L'Oreal formula. I believe this to be the first drugstore iteration of this kind of moist powder eyeshadow formula.

So, I bought Bronzed Taupe (890), a shimmery warm brown, first, and then went back out and picked up Continuous Cocoa (891), a dark cool brown with a satin finish, Iced Latte (888),  a very shimmery cream with golden undertones, Midnight Blue (889), a velvety royal blue base with violet and blue shimmer, and Amber Rush (892), a shimmery warm bronze.

Ok, I'm about to bombard you with a lot of pictures. But I want you to be able to see what these look like!

This is the base of the pot of shadow: you can see the shadow color through the clear lucite base.

And the lid of the jar has a sticker with the information on it:

And then when you open it up, you see the little plastic stopper with "Do Not Discard" printed on it:

And here is the shade. Look at how nuanced that color is!

And swatches! Both are dry, but I've blended out the swatch on the right:

And here is Bronzed Taupe on my lid: 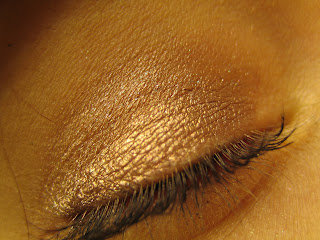 I've taken pictures of the next four that I bought together, so that this won't be the longest post ever.

These are pictured in the same positions in each photograph: 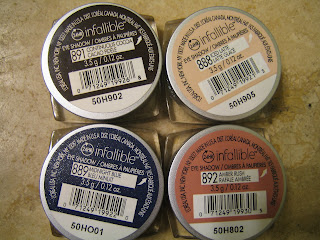 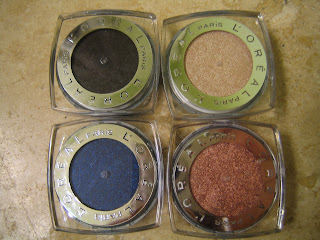 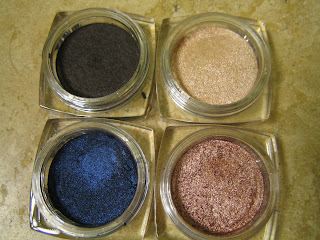 For the following pictures, I've done a heavier swatch on top, and a blended out swatch on bottom:


I've included two photos of Amber Rush; the top one shows the light hitting it, so you can see the kind of metallic finish this one has; the bottom one is more shaded, and shows the depth of the shade a bit more accurately.

So, I know you're probably sick of pictures, but I included a look that I did using Bronzed Taupe from lashline blended up above the crease, Urban Decay's Sellout blended from the crease to the eyebrow, Iced Latte as a highlight under the brown and in the inner corner, Amber Rush on the lid, and Midnight Blue blended lightly into the crease and under the lower lashline. 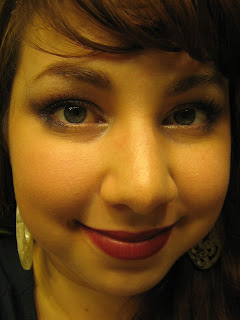 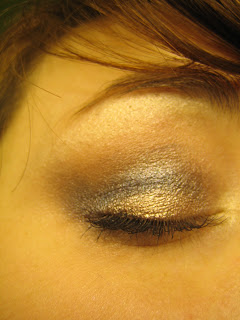 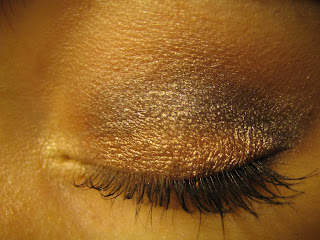 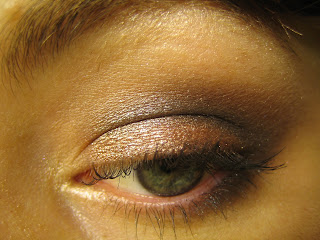 So there you have it! I have absolutely been blown away by these shadows. They are, simply put, amazing. Period. I cannot believe you can find this formula in a readily available drugstore line.   You need these in your life! Has anyone else tried these yet? Are you as excited as I am about them? I don't know maybe the excitement will wear off, but as you can tell, I'm over the moon about these, and I can't believe there hasn't been more buzz about these yet! Oh, and I almost forgot; these have .12 ounces of product in them (compare to Urban Decay's .05 ounces...), and I got mine from Bed Bath & Beyond for $8.79. If you're interested in the science behind these shadows, read up on them on L'Oreal's website here. Pretty nifty!
Posted by Sarah at Thursday, December 29, 2011