I wanted to write up a quick post to show you some new goodies I've acquired recently :) 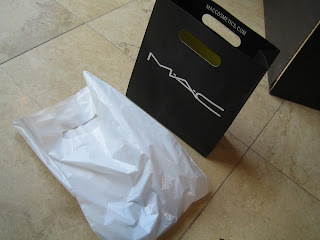 The one is fairly obvious... As to the unmarked white bag, TREASURES AWAIT. It's from the Cosmetic Company Outlet. The closest one to me is an hour away through windy country roads, and I get carsick, so this was no bueno. However, I totally scored!

I purchased two items at the outlet; MAC Mineralize blush in "Sakura," a LE product from the "Quite Cute" collection I regretted passing up, and a Bobbi Brown corrector in Light Bisque. I have the concealer that this is meant to be used with, and I was bummed out that I never bought the corrector on its own, since now they've switched to the "corrector/concealer" sets.

As for the MAC bag, I picked up three items from the Daphne Guinness collection; the blush in Vintage Grape, which is an ombre with red and purple tones, a dark dirty/milky burgundy Cremesheen Glass called "Richly Revered," and a dark burgundy with a touch of taupe Pro-Longwear Lipcreme  in "Approaching Storm". I also got a permanent MAC Paint in Untitled. 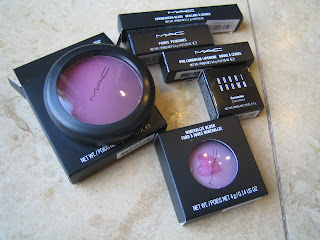 So far I am enjoying experimenting with my new goodies! I'll show you guys some swatches soon. Have you ever been to the Cosmetic Company Outlet? For those of you who may not have experienced the awesome, I feel like I should add a bit of an explanation; it's an outlet for Estee Lauder brands, so they carry department store makeup brands owned by Estee Lauder, like MAC, Bobbi Brown, Origins, Estee Lauder (of course!), and Clinique, as well as some other brands owned by Estee Lauder that may or may not have their own counters, like Ojon, Flirt and American Beauty (cosmetics brands sold at Kohls), and a variety of fragrances. They have mostly discontinued products, things in older packaging, and products from LE collections that have been cycled out. For instance, when I was there, they had assorted items from the MAC Quite Cute, Surf Baby, Wonder Woman, Marcel Wanders, and Venomous Villains collections. They don't have the full collections, and the selection in general is hit-or-miss; if you want a mascara or some powder or a red lipstick, you'll likely find something, but you probably won't find a specific shade in a specific formula in a specific line. Not a great place to rely on for basics (unless you know they frequently stock what you use!), but it's a wonderful place to browse and be surprised.

Hope you enjoyed seeing a hint of some of my new playthings, I'll give you a better peek after I've had some more experience with them and have a little more to say!
Posted by Sarah at Monday, January 02, 2012