Next up in my Sheer Berry lineup is Confession, a lipstick by Urban Decay. Like Night Out, by Hard Candy, this is a lipcolor in a lipstick formula that looks sheer and glossy on the lip. It doesn't have as much "slip" on the lip as Night Out, feeling much more natural. Because it's not as slippery or creamy, it also doesn't tend to settle into lip lines, and applies like a dream; it stays where you put it, and while the color is buildable, it doesn't go on unevenly. One coat gets you a nice sheer wash, and multiple coats deepens it, while still retaining the sheer glossy finish. For reference, I took all of the pictures (both swatches and photos of the color on my lips) with it layered on as dark as it gets; blotting it or applying it lightly will brighten the color, while keeping it in the same color family.

I've spoken about Urban Decay lipsticks before here, in my Review of Vinyl. The tubes are very heavy, which is inconvenient for your shoulder and back if you're carrying them around in a purse, but all that metal makes them feel very luxe, and I always feel a little swell of vanity (and, as soon as I recognize this little swell as vanity, a flush of shame) when I pull them out and apply them in public. They have a cute little sword on the bottom, so you can't set them down on their base with the cap off, but it's pretty adorable. I know, I know, that was a big complain of mine when reviewing Night Out, but I'm much more inclined to forgive this practical design flaw when it's in the name of awesome cuteness and frivolous drama. However, you're paying for this upgraded formula and packaging; this lipstick retails for $22 according to the Urban Decay website. On the plus side? It's vegan, so everyone can enjoy it. Like other Urban Decay lipsticks, it does suffer from a hint of a bitter flavor, but this fades and I don't notice it after the first couple of minutes of wear, and it is decidedly less intense on this shade than on some others (I'm looking at you, Gash!).

In general, Confession is a deep, cool blackberry; it's not as red as Night Out is, but it's not as cool as it gets, either, so if you're looking for something that's closer to a black-purple, this may not quite be it. The Urban Decay website describes it as a "burgundy" color, though it is more purple and less red than what I usually think of when I picture burgundy in my mind's eye.

Here is a picture of the case: 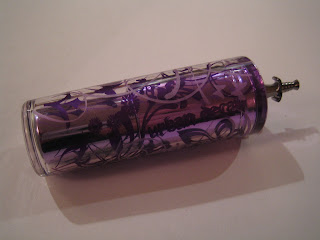 And here is the tube with the lid removed: 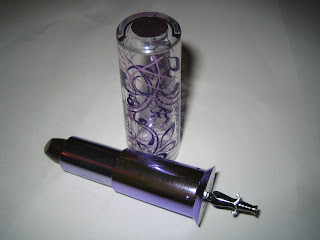 You can see how dark the color looks in the tube in this next shot, though it goes on much sheerer. It's a pretty good match to my nails (Vixen, by Revlon- an absolute favorite!), non?

Here it is swatched on my hand, without flash.

And here it is on my lips, without flash. While it's still firmly a "berry" shade, it definitely leans more purple than red. I feel like this keeps it from being as shocking as brighter reds can be, while still retaining the drama of a bold shade.

And here's a full face shot with no flash
And another of the full face with the flash
Rating: 8 out of 10

Overall, I think this is a great product; it applies well, looks good on the lips, is a little bit moisturizing (though not as much as a balm), and the color is really dramatic while the sheerness lends it the wearability an opaque version just wouldn't be able to offer. Plus, since it's buildable (and designed to be so; it's one of Urban Decay's sheer buildable shades, and yes, they do have shades they describe as being simply sheer, so it's a different formula), it's a great, versatile day-to-night option that will work with lots of looks.  It's also cool enough that you could layer it on top of a warmer shade to change it a bit. According to my brand-spanking-new rating system (introduced at the bottom of this post if you want to check it out), I'm going to give this an 8/10, meaning it's something I'm very comfortable recommending, but I'm not going to say it is hands-down my favorite version of this product; I'm open to finding something I like better, even though this is pretty darn good. However, at the $22 price point, if this is a color you're not sure about or think you'd only use once in a  while, you may want to look at some of the other options in this Sheer Berry series that may come in at a price more conducive to experimenting.

As always, it's been a pleasure, and thanks for reading! :D
Posted by Sarah at Saturday, January 08, 2011