I am posting this against my better judgement; I believe in showing all kinds of experiments, whether I'm thrilled with the results or not. I went and saw "My Week With Marilyn" a couple of weeks ago, and was really intrigued by Michelle Williams' makeup; they really nailed the Marilyn Monroe look, and I know a lot of that is due to her makeup. So, I went down the Google rabbit hole and read up on Marilyn Monroe's makeup tricks. Most of the websites I consulted (I should have bookmarked them or something! If you're interested, just google it, and I'm sure you'll find plenty of tutorials and tips) all had the same set of information. Apparently, Marilyn Monroe's makeup artist, Whitey Snyder, employed all sorts of tricks to sculpt her face and make it look nicer on film. He highlighted and contoured heavily, re-drew her lips entirely, and perhaps even used a secret combination of wax to build them up. Blue-red lipstick was apparently a must because of the way red showed up on film, and a darker red liner and lipstick on the edge of the lip, and lighter red and gloss in the center made them look extra luscious and curvy. A thin line of gold eyeliner above her dark brown liner apparently helped brighten her eyes, and liner on the bottom lash that mimicked the shadow of her lashes, rather than following the lower lashline, helped contribute to her signature bedroom eyes.

So, I had a few hours to play the other day, and decided to go all out and spackle on the makeup! I didn't mean this to be a literal re-interpretation of Monroe's makeup style, but I thought it would be fun to try out some of these tricks and see what the result was. So, rather than calling this a Marilyn Monroe look, it's just a look inspired by her signature 1950's bombshell persona. 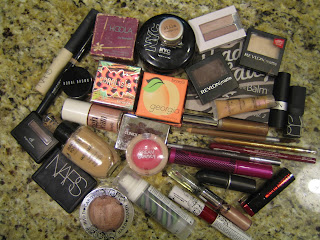 I used way too much stuff. I just kept layer and adding on until I decided it was what I wanted.  I know I usually describe how and where I put color when I list it, but I'm not going into detail this time. Let me know if you guys miss this or not; I know some of the color placement is obvious, and other aspects depend on your face shape. However, if you like knowing how I use individual products, I'll be happy to add it back in. Who knows, maybe this will keep me up nights and I'll start doing it again on my own.

Red Lip Look: Rimmel 1000 Kisses liner in Wine (to re-draw lipline and help shadow the edges of the mouth), MUFE lipstick in Moulin Rouge all over lip, then blotted; Revlon Super Lustrous Lipstick in Really Red around the edges of the lip, NARS Jungle Red in the center of the lip, a bit more of Moulin Rouge applied to brighten the lot. A dab of Clinique Color Surge eyeshadow in Sugar Sugar in the center of the bottom lip, topped with Hard Candy Mouthing Off Sheer Lip Shine in Drama Queen, and a bit of Benefit High Beam along the top of the cupid's bow.

I feel like I pulled a lot of older things out of my collection to do this! I've had that Clinique eyeshadow for more than a few years now...

So. Why don't I think this look was a "success"? All of this layer and contouring might work for film, not so much for real life. And the red lip look was a disaster. I don't like re-drawing my lip line, even though it seems to have been a fairly standard technique in many vintage makeup looks. I'm not sure if my lip line is more topographically significant on my face than most people's or what, but I look like a drag queen. I'm not kidding you. I look like an extra campy drag queen in these photos. I'm beginning to understand why some sort of a top-secret lip wax may have been involved in Marilyn Monroe's signature look; I feel like I could have used a layer of something to help mask my natural lip line. At any rate, I tried to emulate Monroe's signature lip shape by de-emphasizing the cupid's bow, widening the peaks, and rounding the outer edges of my lips.

That being said, I think a toned-down version is great for a classic makeup look; in fact, the next day I did wear a toned down version of this look, which I'll post here for you. I also took pictures with two different lip looks; an ultra- feminine pink lip (in MAC Bombshell, what else?) and the aforementioned bombshell red lip. This is the sort of eye look that is conducive to a bunch of different lip looks; a nude could modernize this face a lot, while all sorts of pinks and reds are great for a 1950's pinup look.


With flash, so you can see some of the contouring better: 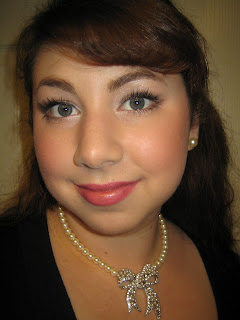 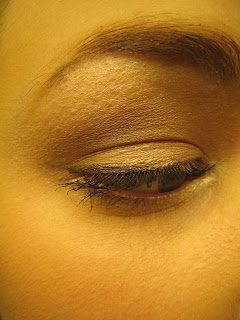 
And here is the look with the heavily contoured red lips. This was a really interesting technique; I might try it again without re-drawing my lip line. I couldn't tell that I'd used 7 lip products to get this result, but my lips really did look much more "3-D" (I know, I know... it's real life, they are 3-D! But you know what I mean...). They looked fuller and more rounded, and not just the shape around the edges; they appeared to come away from my face more in the center, if that makes any sense. Hopefully you'll kind of be able to get the gist from the pictures; click to enlarge them if you are really curious!

So there you go! My play-day take on a 1950's, Marilyn Monroe inspired bombshell look. I'm not 100% happy with this; I think if I were to do it again, I'd try to make it even more literal, or I'd try to put my own twist on it and just emphasize a couple of the key features that work for me. Keep your eyes peeled for my everyday version of this look that I actually wore out the day after I experimented with this!
Posted by Sarah at Thursday, February 16, 2012