I felt like getting dressed up over the weekend, and my boyfriend and I had a couple of errands to run (yay mall and Target!), so I figured that was as good an excuse as any to pull out a new pale pink blouse and grey plaid skirt I'd been wanting to wear.  I had Valentine's Day on the mind (I know, I know, 10 days away... But still, I've been trying to think of something to do since I am the planner in this relationship) and was inspired by the soft petal-pink of my blouse, and ended up doing a sweet, romantic look that would work for the office or date night. It's also relatively quick and simple, when compared to a lot of the looks I do; I'm used to using 3 or 4 cheek products, a bronzer, a highlighter or two, maybe 2 powders, more eye shadows, etc... than what I ended up with here, and I was pleased with the cleanness of the result. I tend to just load on more product until I get the color or look that I'm going for, despite knowing deep down that less usually is more! This might become a new go-to "quick-ish" look (definitely not the most streamlined makeup look I do, but not the most complicated, either)! 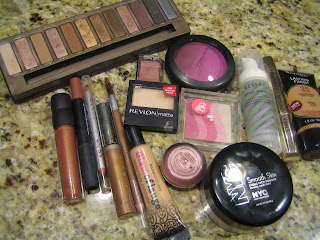 Face: I started off with Almay's Smart Shade Primer, then followed with Rimmel's Lasting Finish 25 Hour Foundation and Hard Candy Glamoflage to correct dark circles under my eyes and redness. I set it all with NYC's Smooth Skin loose powder. I used Physician's Formula Shimmer Strips in Healthy Glow (focusing on the pink shades) all along the fullest part of my cheek, and then followed with MAC Vintage Grape (focusing on the medium-dark area) on the apple of my cheek and the bottom portion of the cheekbone.

Eyes: I used MUFE Aqua 16 as an all-over base, and then used Sally Girl powder eyeshadow in Mauve from lashline to just above the crease. Urban Decay Toasted (from my Naked palette) went on the lid, and Revlon Vintage Lace was used to highlight just under the eyebrow and the inner corner of the eye. I used  Prestige Brow Perfection (in light/medium) to fill in my brows, and Anastasia  Brow Gel in Caramel to set them. I used the metallic Plum end of an old Ulta gift set eyeliner (I'm not sure if this is still available, but any plum eyeliner would do) to line the top and bottom lashes, getting it as close to the waterline as possible (it did not stay put there). Finished off the eyes with L'Oreal Voluminous Million Lashes. I should add that this no longer flakes on me; turns out it does much better once it's aged a bit, although it still doesn't define lashes the way I wish it did. 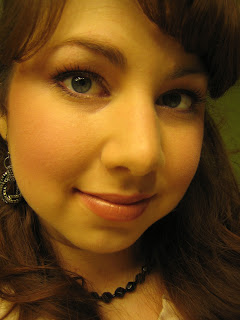 The next photo is the best shot of my blouse I got; I need a better method to take pictures of my outfits for you guys! You can't really see it here, but the neckline is cartridge pleated and has a narrow V-neckline with ruffles down the front. The skirt was grey plaid A-line, very basic, ends just above the knees. I wore it with black boots.  I like this blouse so much, I want to talk about it a little bit more; I have such a hard time finding blouses that fit correctly as I am busty, but this one has a zipper on the side rather than buttons down the front, and it's marvelous! Plus, I got it on sale from Express; it was originally $55, and I got it for less than $20 after tax. I love end of season sales!

I am over the moon about my new blouse, I've worn it twice in the last week! I'm also really pleased with this lip color combo; it's a really glowy pale pink/ nude look that works with a ton of different eye and face combos. I don't think the photographs did it justice. I also suspect that Bettina is really close to Cover Girl's lipstick Romance; I'll do a comparison in the near future for you guys, just as soon as I remember to get them both out and take a good look at them! Bettina may be more yellow-pink and Romance might be slightly cooler.

What do you guys think? Do you have any big Valentine's Day plans? Do you celebrate? I usually just use it as an excuse to get a little more dressed up than usual and have a date night; I don't think we're going to do anything big this year, either.  My (overly) ambitious Disneyland Road Trip idea got shot down, so now everything else pales a bit in comparison :P
Posted by Sarah at Tuesday, February 07, 2012