I have so many looks and products photographed and ready to go right now, I couldn't decide what to post today! I am falling behind on posting photographs, but I've been taking pictures as regularly as ever... Bad combination! I've also decided from here on out to make my closing thoughts more of a summary of the post, since I tend to write rather lengthy posts. If you just want a run-down of the important points, head to the bottom and read that paragraph!

Anyway, I finally decided to show you L'Oreal's Infallible foundation; I've been using it for quite awhile now, on and off. You'll be able to see in the photos that I'm nearly through my bottle of foundation; seeing as how I've been using it for awhile, I figured I had better let you guys know what I think of it before I run out and have nothing left to photograph! So, let's start off with the basics; according to L'Oreal's website, their Infallible Never Fail Makeup is supposed to last 18 hours and look flawless, without needing any sort of touch-ups. They claim it has a "vitamin and mineral complex [that] combats the signs of fatigue"; smoothing pigments are meant to resist rubbing off and fading, continuous concealing will hide imperfections. It contains SPF 20 to protect skin from sun, and is also supposed to resist humidity while containing oil-absorbing mattifiers to fight shine. The suggested price is $14.29, and it comes with 1 ounce of product. A little bit on the pricey side for a drugstore foundation, but still half as much as I was spending on my MUFE Face and Body Makeup (which I guess I've never posted about...? I should, seeing as how I've been using it pretty consistently since I was 17). I was going to Florida and wanted to see if I could find a less expensive foundation that would hold up to extreme heat, humidity, and persperation. I'd heard good things about long-wearing foundations, and after reading various reviews, L'Oreal's Infallible Never Fail Makeup and Rimmel's 25 Hour Foundation (which I used as a base in this look) decided like good products to try. I bought both, and have gone back and forth between preferring one over the other. The Rimmel foundation is about half the price of the L'Oreal, but it doesn't have a pump (which can get messy and annoying), the lightest shade is a little too dark for me, and I feel like it gets oilier faster. However, the L'Oreal formula is thinner and less creamy, which makes dry skin show up more under it, so I have to be sure that I've moisturized the heck out of my face and exfoliated any dry patches, especially during winter. Neither one holds up to its 18 or 25 hour claims. The L'Oreal makeup also provides slightly less coverage, but with a more natural texture; I'd describe this as a medium coverage foundation. As far as I know, it is not buildable; if you try to add a second layer, you run the risk of the product pilling. The texture of this is thin and almost watery; it's actually a kind of weird texture. However, this doesn't adversely affect application. I always apply with clean hands and fingers; I have much better luck getting a natural texture that way.

So, what do I think of the L'Oreal Infallible Never Fail Makeup? It's a really decent formula for a really decent price, but it's certainly not my favorite foundation. It's not what I reach for when I know I'm going to be photographed a lot, or want to look fresh all day long, or for special occasions. When I bought this, I realized I probably should have gotten the next-darker shade, but now that it's winter and I'm paler, Soft Ivory (602) works just fine. Unfortunately, this does not hold up all day. If I wear my glasses, as soon as I take them off, I have patches of bare skin from where the nose-rests were sitting. This rarely happened with my beloved MUFE Face and Body Makeup, and when it did (as a result of extreme heat, humidity, etc...) it was not nearly as noticeable; I could pat on some powder and it would look just fine.

I started wearing this with primer, and it holds up much better that way. It is a perfectly acceptable foundation when I add primer to my routine.  However, I feel like if I have to purchase two products to use together to make this work, I might as well spend that money on the more expensive, nicer product I can use alone. When I do use primer under my MUFE makeup, I use much less of the MUFE foundation, since it seems to spread out more easily and in a thinner layer without compromising coverage; with the L'Oreal foundation, I use just as much over primer as without primer, so it does not help to conserve product by using primer. My other problem with this foundation (and with a lot of foundations, actually...) is I feel like the texture gets wonky wherever I try to add concealer, especially on my nose. I tried to take some pictures of this, but I don't think they show what I'm talking about. Anyway, I have a bear of a time trying to find foundations that I'm 100% satisfied with, especially when I am trying to find less expensive drugstore alternatives, and can't try the product on before purchasing it. Maybe I'm just super picky, and I'm sure that these texture issues aren't something noticeable until you get about a foot away from my nose, but it's something that bothers me.

Would I re-purchase this? I'm still trying to decide if I would. I think it's just fine for every day when I want to wear makeup to school or out to run errands, and don't want to use anything expensive, but I'm still a little bit frustrated every time I take off my sunglasses and see red patches where the nose-rests were, or after I've finished my makeup I take a look at the weird patchy texture on my nose from where concealer and powder have affected the original foundation. I might try Revlon's long-wearing formula; I might try L'Oreal's True Match. If anyone has any suggestions for an inexpensive foundation that wears well and provides a natural looking texture, please let me know!

So, here I am after moisturizing, but without a stitch of makeup: 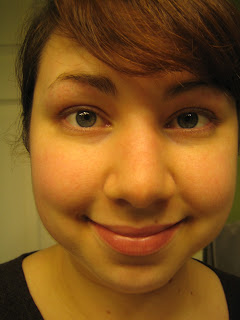 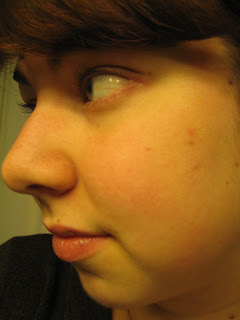 I have sensitive skin that tends to be dry. Because of this my main concerns are products that might emphasize any dry areas I have (thankfully I have a routine that keeps my skin fairly well moisturized), and redness. I always have redness on my cheeks down to my jaw, and on my nose. I also want something with enough coverage to help neutralize darkness under my eyes. Every once in awhile, I get the occasional blemish; you can see one on the second picture above, on my cheekbone. I don't need a full-coverage foundation; my goals are to get an even canvas to apply makeup onto, and to keep a natural-looking texture.

Here's the foundation; my bottle is so messy after 9 months of having it. If you like foundation that stays nice looking, this isn't for you; I've never had a bottle get this nasty looking! 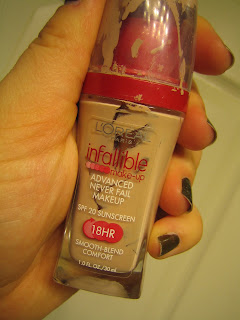 And here it is, blobbed on the bottom, blended slightly on the top so you can see a bit of the texture. See how thin it is on top? There are no thicker areas like a creamier texture would show after minimal blending, and it doesn't smooth over the fine lines on my hand; it's thin enough that it doesn't cushion over those areas. I don't find this to be a problem on my skin, but if fine lines and wrinkles are a concern, this may emphasize them. I can't say for sure if this would be the case, though.


And here I am wearing the foundation over Almay Smart Shade Primer; I'll review the primer separately, but despite it's claims to help color- correct, I think it actually made my skin redder on the day I took these pictures. I was having an extra sensitive skin day. However, it calmed down by the time I got my foundation on, so that's not a concern in these pictures; I'm just letting you know that the primer hasn't affected the way my skin looks between the pictures of my clean face, and the pictures below where I'm wearing foundation, it's just there to help the foundation wear longer. Notice the difference in redness around my jawline, on my nose, and also where that blemish is on my cheekbone.  It covers everything enough for my liking; I usually add a touch of concealer after this step under my eyes and on my nose, but you can see that this adds significant coverage on its own.

Who would I recommend this makeup to? To people who only need to wear foundation for a few hours (or who are willing to wear a primer under this foundation to make it last a full 8-10 hour day), and who want a really decent, affordable foundation. If you don't wear concealer on top of your foundation, you might have fewer texture issues than I do; on areas of my face where I don't use concealer, the texture of this looks much more natural than many other foundation options. However, it doesn't play well with concealers or a second layer of foundation, so be warned! You may encounter pilling, and you may have to fiddle around to get a combination you like. I don't dislike this product, but it doesn't live up to its claims, and it's not my favorite foundation when I am comparing it to brands that are twice its price. In the drugstore arena, it's a top contender among the 6 or so readily available drugstore formulas I've tried.
Posted by Sarah at Monday, February 06, 2012