Hi Guys! It's been awhile since I've posted a recipe. I know that's not the main purpose of this blog, but I enjoy taking  a break from makeup every once in awhile and sharing my culinary exploits with you all.

I just made Monkey Bread for the first time last night. I know, I can't believe I'd never made it before then, because it was SO easy and it's made of delicious. My boyfriend told me before I made it that he wasn't sure if he would like it. "Excuse me? Do you KNOW what goes into this?" It's 2 sticks of butter, a bunch of sugar, and the equivalent of 40 biscuits. With an ingredients list like that, you know it's going to be good.

And then he started asking why it's called Monkey Bread. "Because it looks like a monkey made it?" Sure. Good enough for me. Let's go with that.

So, if any of you have not had Monkey Bread, it tastes like a delicious ring of deconstructed cinnamon roll. And, while you can make your own dough, that takes things like time, effort, and kneading, so I decided to take the easy route and use Pillsbury biscuits. They actually sold a package of 4 containers shrink-wrapped together with a recipe for Monkey Bread on the label. I did not use their recipe (I started from this recipe), but I did buy that package. They're the little 7-oz cans of buttermilk biscuits; NOT the flaky kind or the giganto-Grands kind. Just the nice little package with 10 biscuits each.

Before I go any further, I'll show you guys a picture. This is your reward for reading this far. If you continue reading and make the recipe, you actually get to EAT this. That's a pretty good reward. 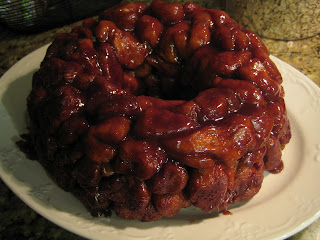 4 cans of non-flaky, buttermilk biscuits. Plain ol' Pillsbury Buttermilk Biscuits will do.
2 Tablespoons of cinnamon (less if you're not big into cinnamon)
2 sticks (1 cup) of unsalted butter
1/2 cup of brown sugar
1 cup of regular sugar

Preheat your oven to 350 degrees.

Start by unwrapping your cans of biscuits and cutting each biscuit into 4. This doesn't have to be precise; you can stack 2 or 3 biscuits at a time and then quarter them. Go ahead and just place these into a pile.

Put your 1 cup of regular sugar and your cinnamon into a big ziplock bag or a paper bag. I used a paper bag, which was kind of messy, but I wanted the extra room for the little biscuit parts to jiggle around. Get the sugar and cinnamon mixed up together, and then put your pile of biscuit quarters into the paper bag. Give it a good shake (preferably over the sink), and check to see if any of the biscuit pieces are sticking together. If they are, you'll want to pick them apart and make sure all of the sides get coated in your cinnamon sugar. Once they're all coated, put them in the pan you are using, and pour the excess cinnamon sugar on top.

Now, you're ready for your ooey-gooey topping. This is the lifeblood that courses through your Monkey Bread. Either over the stove or in the micrwave (working at 30-second intervals, stirring in between) melt your butter with your brown sugar until you have some unholy concoction of incredibly hot deliciousness. Pour it over the biscuit pieces in the pan. It will seem like an awful lot of liquid, and you might not even have monkey bread showing in places. That's ok. Just make sure the level is pretty even, and drag pieces of bread over from one part of the pan to an emptier part if you need to.

Carefully place your pan of delicious into the oven and bake for about 30 minutes (maybe a little longer), or until the top has darkened and looks golden and crispy.  Once you pull it out, let it sit for 15-30 minutes, and then carefully flip the pan over on top of a plate. If you give the pan a good shake or two, the Monkey Bread should pop right out.

Dig in! It will be delightfully ooey-gooey in places, and amazingly sugar-crisped and caramelized in other areas. The inside will be cinnamon-y and sweet and oh-so-soft.

I have a few more gratuitous images of what this will look like once it's done.

Here's a gooey part. It's so delicious, my camera couldn't focus on what it was doing.


And here you can see the transition into the slightly crispy caramelized portion:


I kid you not, this stuff is amazing. It takes almost no effort, and it does not taste like it's from a can. Sure, you could make the dough yourself if you enjoy that sort of thing, but it's really not necessary once you dump a bunch of sugar, cinnamon, and butter on it. I feel compelled to mention that this was a big hit with both my boyfriend and his parents; his mom and dad were fighting over the portion I sent over, so I brought them more, and his mom told me she might not tell his dad there was more in the house... Can't say I blame her! It's tasty enough to keep for yourself, but easy enough to make extra to share :)