So, my customer may have thought it was unethical to spend $25 on a Chanel polish and further justify couture pricing, but honestly, if I had the money I would do it. I don't think the polish is *worth* the money, per se, but I understand that this is one way that couture companies elevate the brand. Honestly, I have pangs of conscious when I consider how much some of us (myself included) put towards beauty products, but I sincerely consider this to be one of my hobbies, so when I splurge, it's almost always on makeup. Some people get a glass of wine with their dinner, some people buy expensive bags or jewelry; I save my pennies for nail polish. (Or lipstick or eyeshadow or eyeliner or blush or...) But I don't have to justify this to you, fellow makeup enthusiast! You know how it is.

On that note, Butter London is the most expensive nail polish I own, and I have two bottles of it; I bought them both at Ulta right when they started selling them there, and they let me use a 20% off coupon on them, even though they're considered a prestige brand (sweet!). They normally retail for $14 and have .4 ounces of lacquer. These are 3-free.

Yummy Mummy is a mauve-toned griege-ish nude-ish color. It's hard to pin down with one descriptor, though I probably wouldn't settle for one even if I could.I would describe it as a cream with some very subtle shimmer strewn throughout. It's a really gorgeous color; sophisticated and on-trend while still remaining restrained. It's completely opaque in one coat, but patchy, so I added a second to make it look acceptable; however, the formula is really gloppy, and so it didn't quite look smooth and even. I also got some drag around the base of the nail where the brush dragged the excess polish to the tip of the nail, so the color looks lighter at the base of the nail than at the top even though it's opaque across the entire nail. A layer of Seche Vite helped hide the flaws, but I was really unhappy about this issue. The other side of the coin is that this polish is amazingly easy to control, and so I hardly got any on my cuticle, which is kind of a miracle for me. Unfortunately, I had a couple of chips by the second day of wear... This would be a great polish to throw on in a hurry since you can get away with one coat and not have to touch up since it's easier to do a neat manicure, but I don't know that I'd put it on if I needed something that would last for five days straight.

One thing I really like about these is the bottle. It's cute and sleek, and shows off the color inside really nicely. It's also very easy to hold and use while painting your nails. The cap lifts off to reveal a grippier handle underneath, and the brush itself is nice and narrow and flexible, but not too out of control. 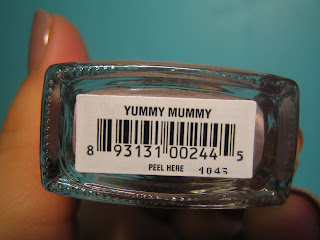 I think this is a good polish in some respects; the formula is easy to control, and the color is absolutely lovely. However, getting even application can be challenging, and this chips on me way too quickly for me to be able to recommend it whole-heartedly, especially given the steep price tag. I won't be reaching for another Butter London color unless it's really spectacular and unique. I think the good and the bad just about cancel each other out, making this a decent polish because of its redeeming qualities, but they certainly aren't great enough to bump this above average. I don't know that all the shades are like this, but my other Butter London polish chips as well, even though it doesn't have the same application issues. That being said, these are probably too pricey for me to feel good about risking it with another shade.
Posted by Sarah at Sunday, August 07, 2011