I've picked up a few fun things over the past few days here and there, and thought I'd post them here! Depending on your perspective, this has been a successful (in terms of finds) or unsuccessful (for my wallet!) week! I am going to Las Vegas in a little bit, and so I wanted to pick up a couple of things for that, and I found The Balm's Shady Lady Vol. 3 palette at Marshall's for $16! I had wanted it when it was $40 at Sephora, so I was pretty thrilled to find it there.

I also stopped in to Walmart the other night and I saw a new Rimmel line of lipglosses, Stay Glossy, and I picked up three to try out (I'll be reviewing those in the next week or two, after I've had a chance to get a feel for them), and then I picked up a few goodies at Bed Bath and Beyond. I actually had a list for BB&B! I wanted to try the Sally Hansen Salon Effects polish stickers because I'd heard they lasted longer than regular polish, and I don't want to bother with worrying about chips while I'm on vacation. I'd seen pictures of Laced Up, and knew that was the pattern I wanted to try first. I wanted bobby pins since I always lose mine and wanted to make a real effort to have Big Girl Hair while I'm out on the town. I got one of those plastic hair volume bump thingies that make it look like you teased without the teasing, mostly for my costume (ouch: here's where you find out I'm going to Vegas... for the Star Trek Convention!), and a pumice stone to try to spruce up my cracked heels and a couple of ugly callouses. Finally, I wanted new mascara, since all of mine are really old except for my Clinique (which is lovely for everyday, but not as dramatic as I like for evening looks) and my L'Oreal waterproof, which looks like a dusty black. I ended up with L'Oreal Voluminous Million Lashes, which I've used before and have been really pleased with. While there for those things, I ended up picking up a couple of nail polishes, too;  Revlon has a REAL knock-off of Chanel's Graphite (theirs is called Carbonite), so we'll see if that gets closer than my carefully crafted formula. I had a customer compliment me on my polish the other day, and I was praying she wouldn't ask me what it was... she did, and I painstakingly tried to explain how I arrived at the final color. I think she got more than she bargained for. (Then she started talking to me about the "ethics" of paying $25 for a nail polish, at which point I decided I was the one who'd gotten more than I'd bargained for). I also stumbled across a Sally Hansen Insta-Dri polish in Bronze Ablaze, which has a nifty slight duo-chrome. I'm not going to lie, it reminds me a bit of a warmer Chanel Peridot, without the blue flash in the bottle (which doesn't show on the nail anyway). Call me obsessed, I don't care; I love the Fall 11 Chanel Beauty line, and if I can find cheaper alternatives that evoke those colors, I'm going with it, even if they're not exact dupes. I picked up some really cheap eye makeup remover pads to travel with (hopefully they work!), and a headband like one that I used to wear all the time but broke. Finally, I saw a new fall Maybelline blush in Ravishing Rouge, which looks like this great glowy burgundy. Hopefully it stands up to my expectations! 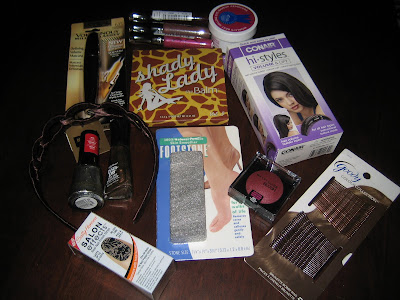 So there you have it, I'll let you guys know how these things go. Anything you guys are particularly interested in hearing about? I'll try moving them to the front of the line (as long as I have enough time to get a good enough impression to share with you guys!). Have any of you tried any of the things I've picked up? I'm always curious to hear about others' impressions!
Posted by Sarah at Sunday, August 07, 2011