I'm finally getting around to writing about the Urban Decay 24/7 Glide-On Shadow Pencils, a product I've been sitting on for awhile... Part of this was because when I first swatched them, I had really mixed feelings. They didn't live up to the high hopes I had for them when I first used them. I'm happy to say that after experimenting with them a little, I've figured out "the rules" and am now very happy happy with my purchase and the effect these give. I am a purple eyeshadow junkie; I thought for sure that Mercury and Wasteland would be the first two I picked up, since they're neutrals but still nuanced and edgy. However, as soon as I saw these in real life, I fell for Delinquent and Morphine. Hard. Morphine is very much in the line of Urban Decay's Eye Shadow in Asphyxia, an iridescent shade that shifts between blue violet and fuchsia violet. Delinquent is a warm purple with an incredible pink shimmer. Both are really unique shades that just wouldn't read the same in a shadow form, which justifies working with these pencils.

For those of you who have used Urban Decay's cult-favorite item, the 24/7 Liners, you may understand why I expected to be able to just slather these on and have them stay put FOREVER. This was not the case; the formula is ever so slightly less pigmented than the eyeliners (as you'd expect in an eye shadow product), and a little creamier, too, to facilitate blending. And trust me, you need to blend these if they're going anywhere near your crease. You can wear them as a liner; the pencil is chunkier, so you won't get a precise line, but they'll definitely stay put near the lash line once they set (after about 30 seconds or a minute). However, once you paint these beauties up onto the lid and into the crease, you need to blend them out a little into a thinner coat to keep them from looking patchy and creasing. Once you do this, they stay beautifully all day (use them over a primer, and if you have oily lids, set them with a bit of translucent powder or shadow just to be sure, though I haven't found this necessary on my own normal lids). These pencils contain .1 ounces of product, and are $20.  The texture is very creamy and stays tacky for awhile; it's not sticky, though powders will stick to it very easily if you load them on top of it. 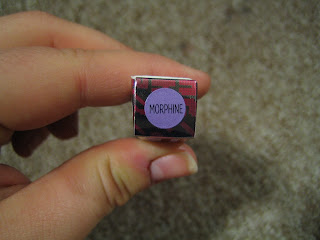 And here was my first attempt at wearing these. They're over NARS Eyeshadow Base, but they still ended up looking patchy. I kind of just loaded them on and then went for it to see how they'd act. In retrospect, this was a mistake. I have Delinquent on the lid and especially heavy around the lashline, with Morphine blended out from the crease and in the inner corner.


I thought I should show you the results of further testing to show that these can be worn successfully when blended out a little. In the next pictures, I am wearing Delinquent over a liquid shadow (but no base), blended out on the lid, with a second layer also blended out on top of the dry first, and then I just used the pencil as a liner (without any blending) on the lash line. I used a light gold shadow in the inner crease and under the brow bone as a highlighter. As you can see (especially if you enlarge these) the pencils are still a little patchy, but nowhere near as bad as they were the first time I used them.

These are way too difficult to work with to garner a higher rating than this, but the colors are really beautiful, and I think the effect is worth playing around with these. I think the best way to use these is over an eye primer and with a shadow over them (at least in the crease) and then set with a bit of translucent powder; used like these, I've worn them all day with no patchiness or creasing, although the powders dull the dazzling straight-out-of-the-pencil effect a bit. I also like that you can use these so easily as a liner, even if they are a little too chunky to create a precise line. I urge you to check these out if you're comfortable experimenting with these over bases and set with powder shadows or translucent setting powder. It's a neat product, if not fool-proof. However, I do think these shadow pencils have come a long way from other shadow pencils I've used in the past, but they're still not a perfect product, and using a traditional powder shadow may be simpler if you're uncomfortable with the idea of having to take extra steps and time to use these.