This is my first of the new Maybelline nail polishes, and I have to say... I will definitely be keeping my eyes open for more of these! They are smaller than your average bottle of nail polish at .23 ounces, but they're also a little less expensive than L'Oreal or Revlon at right around $2.99 a bottle.

Downtown Brown, from the new limited edition fall line, really called to me. It's been described as the nail polish version of MAC Club or Urban Decay Lounge eyeshadow; a warm reddish brown with a green shift. On the nail, it's stunning. In brighter light, it looks like a very warm auburn brown with green shimmer, and in shadow it can almost look like a warm charcoal grey with aqua shimmer. The (numerous) pictures I'm posting here don't do it justice; I never finish bottles of nail polish, but with only .23 ounces in this one, I am sorely tempted to pick up a backup. It is that cool. The formula was just fine (nothing stellar about it, but I didn't have problems either), and it was opaque in two coats.

Not my neatest manicure ever (I swear, it'll look fine on my nails, and then I'll see a close up shot and wish I'd spent some more time cleaning up my cuticles), but I think this gets the point across. 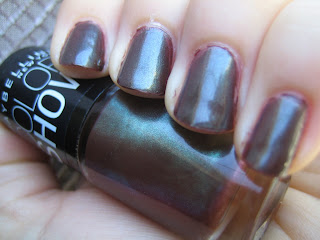 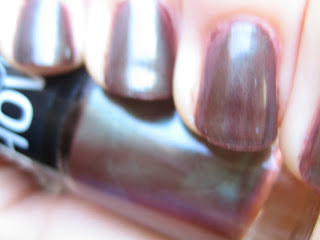 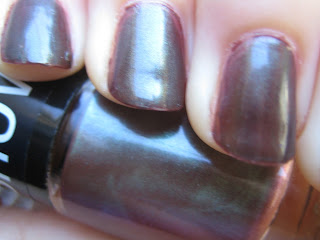 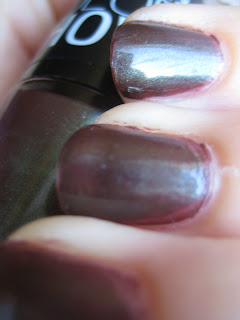 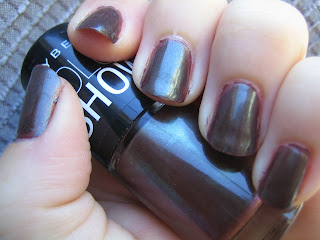 Summary: Yes! Go buy this! If there is any part of you that thinks this color is appealing to you, you should be keeping your eyes peeled. The pictures really don't do this one justice, and it's such a neat color for fall.
Posted by Sarah at Saturday, September 01, 2012