NOTD: OPI I Knead Sour-Dough- and some news!

Hi guys, I'm showing off OPI I Knead Sour-Dough today, a polish that was underwhelming the first couple of times I wore it, but quickly earned a special place in my heart. Let me explain.

First, my complaints. You may notice in some of the pictures this gorgeous rose gold shimmer that flashes in the bottle at some angles- this is not visible on the nail. My second complaint is that it chips like crazy. I'm lucky if I get a full day with no tip wear. You'll notice that in the pictures, too; I took photos the morning after I painted my nails and I already have a couple of small chips.

Now, the neutral points: the color itself is beautiful, just lacking that nice shimmer I noticed in the bottle. I Knead Sour-Dough today is a slightly frosted muted burgundy. In low light it takes on a brown tone, and in bright light it looks a bit rosier. It's a chameleon, so I've shown you in shade, in indirect light, and then in direct light. The formula is really nice, it's easy to put on the nail; I like OPI's formula and brush, their colors just chip on me very quickly, with this being an especially bad culprit. 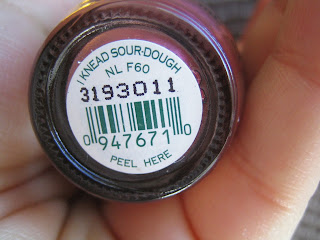 Finally, the reason this nail color has become extremely special to me; it was the color I happened to be wearing when I got engaged!

John proposed with my mother's ring, which is still soldered to her band. It is incredibly special to me to have her ring, and it was really neat knowing I got engaged with the same ring she did. 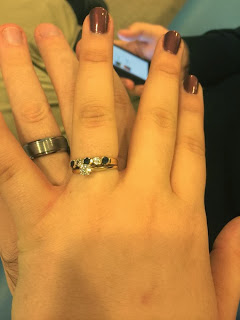 But he also gave me his great aunt's ring from about 1930 that I have been wearing more often; it sits lower and doesn't have prongs, so even though I'm a klutz I haven't been banging it on anything. 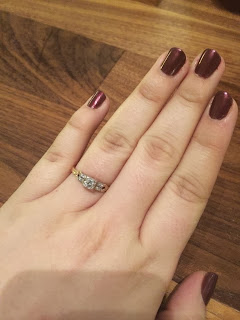 So there you have it! That's my big news, and I was also able to show off I Knead Sour-Dough to my nearest and dearest. It's a beautiful nail color, but I can only plan on wearing it for a day or two until it begins chipping.

To those of you who are engaged, do you remember what you had on your nails when you got engaged? Do you wear it for special occasions?
Posted by Sarah at Wednesday, November 06, 2013