Have you ever stumbled across something in your stash that you had absolutely no memory of? That's how Stella was for me. It's a lovely color but not the type I typically pick out for myself, the paint on the bottle had been worn away as if it had been hiding out for quite some time, and I had absolutely no memory of purchasing the color or of wearing it, which is really unusual for me; even if I don't remember where I got some of my oldest polishes, I'll recall seeing the bottle and using the color. Not so with Stella. After some digging, it looks like this was released back in 2009 with the Retro Diva collection!

Stella is purple-fuchsia metallic shade with some micro-shimmer scattered throughout. It isn't a duochrome, but it does have wonderful depth that gives it a multidimensional feel. It hasn't worn very well-- it developed a few chips only hours after application, and now on the second day I'm seeing significant tip wear-- but I can't tell if that's because it is an old polish, or if the old China Glaze formula has been improved upon since this was made in 2009. 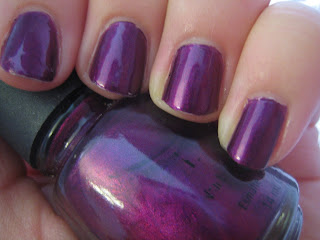 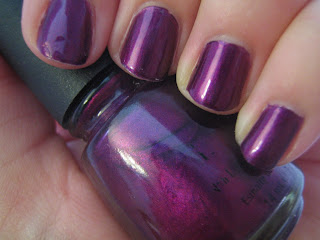 My camera was having trouble capturing the warmth in the color; it's much more of a raspberry color, and much less violet than in the pictures. So strange!

I'm excited to have found a beautiful color that I didn't know I had, but am still curious as to how I got the shade. It could have belonged to my mom, or been a gift, or maybe I just picked it up myself and never wore it. At any rate, the chips are kind of a bummer but it's a pretty enough color that I am positive I'll find myself reaching for it again!
Posted by Sarah at Tuesday, August 27, 2013