I rarely post about products that bombed so hard for me that I chose to return them. Why? Well, I feel like if I hate something enough to not even try to make it work, I haven't spent enough time with it to give it a fair assessment. However, it occurs to me that you guys might be interested in things that failed really terribly for me, and in this case, I'm also just really curious to know if anyone else has used these products and figured out how to use them correctly, or if you loved them from the get-go.

A few months back I went to Nordstrom with my boyfriend's mom and we got makeovers at the Trish McEvoy counter. I had never used the brand before, and I was impressed with their innovative, less-is-more approach to makeup. They sell these awesome makeup bags with binder loops in them that you attach magnetic "pages" to, so you can keep your eyeshadows and blushes organized on those pages, and the rest of your brushes and products can be contained loose within the makeup bag. Pretty clever! I picked up a few things that the makeup artist used on me, but was put off by a few things. First off, she refused to put a nude lip color on me, even though I told her I had a hard time finding one that worked for me and was interested in purchasing one. Instead, she put a sheer berry color on me... Well, that's great, but as evidenced by my "Sheer Berry" series on the blog back in January 2011 when I first started the blog, I already have more sheer berry lip colors than I can shake a stick at. The second thing that left a bad taste in my mouth was the fact that they sold me the wrong brush; I know I should have checked at the counter, but I just didn't think of it since I was very specific about which one I was planning on buying as we were ringing up. So that was going back no matter what.

Now, the eyecolor that I came home with (a really pretty purple with gold flecks) is great, and I do use it. However, I could not for the life of me make two products that I was really excited about work on me; the Brightening Eyeshadow Primer in Sand ($25), a really flattering peachy-pink shade, and the "Finish Line" Eye Color Seal ($24), a product meant to seal powder eye color and help make it work as a liquid liner. From what I can see on Nordstrom's website, both products have high ratings. However, my eyeshadow was creasing more using the Brightening Eyeshadow Primer than with my other two go-to primers (Nars Smudgeproof Eyeshadow Base and MUFE's potted Aqua Creams), and despite using the Eye Color Seal exactly as instructed (when I returned it, the girl asked if I was sure I was using it right and gave me instructions again- yes, this is how I was using it!), I'd end up with a random streak or two of that color across the side of my face by the end of the day. Unacceptable; I've had better luck using water to pick up eyeshadow with! 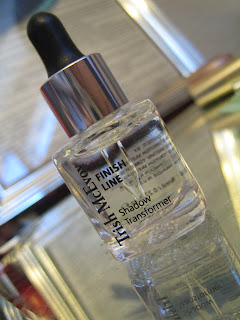 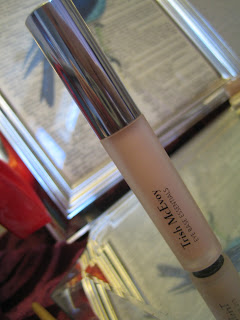 So... like I said before, neither of these products worked for me, and for the price I wasn't willing to deal with creasing or random purple streaks on my face from my eyeliner, so I took them back. I tried both items several ways and several times, but couldn't make it happen. It could just be body chemistry, since there are rave reviews online, but I just thought I'd put my two cents into the aether. Has anyone else tried these products? Did they work on you? I won't completely write off Trish McEvoy; the eyeshadow I bought is just fine, they used a beautiful blush on me that I may go back for at some point, and I like their innovative approach to organizing your daily makeup routine.
Posted by Sarah at Wednesday, October 24, 2012