I recently pulled out Tarte's True Blood Palette that I picked up on clearance from Sephora last holiday season. I was originally on the fence about it, but after the price dropped I knew I wanted it; I like Tarte's eyeshadow formula, and the colors looked really versatile. Tarte also has a really nice matte formula, and I was looking forward to adding a couple of neutral mattes to my collection in the form of this palette. In addition to the eyeshadows it has a primer, an eyeliner, and a mascara, but I only used the eyeshadows for this look.

At first glance, this palette looks like it would be better suited to "edgy" looks; the black and red corset look is your first indication, but lots of the colors in it are really vampy and bold. However, I wanted to see if I could do a very natural-looking eye to go with a bold red lip for daytime using this palette. 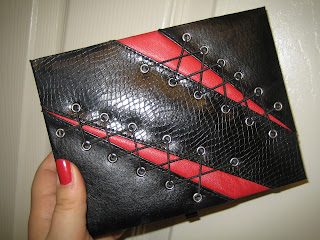 One really annoying thing about this palette is that the color names aren't printed anywhere on it, and I lost the insert that has the shade names. So, I'm going to be referring to the colors based on their position in the palette in rows, with five rows total. So if I'm referring to the black matte shade on the bottom, I'd say the black matte shade (second from left in the fifth row). Likewise, the silver shade just above and to the right of it would be that silver shade (third from left in the fourth row). Hopefully that makes some sort of sense.

Just for kicks, I used a one of my my pink-brown blushes (I can't remember which one right now... Probably NARS Douceur) with Exhibit A by NARS over it, and I am wearing NARS lipstick in Jungle Red on my lips. 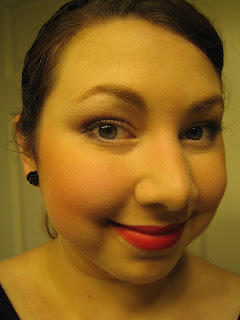 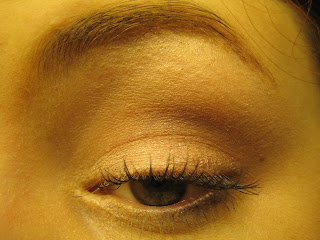 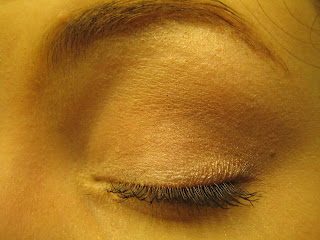 The tan/gold sparkly shade that I used on the upper lashline had SO MUCH fallout. All of the fallout. It's up there with Urban Decay's Midnight Cowboy for fallout. Other than that, I think this is a really versatile palette, and I'm going to try doing a vampier look from it to compare to this one, so keep your eyes open for that! It has everything you need for a really natural eye look, though; highlight, contour, and nice in between shades to add lots of depth to a natural eye, with a variety of finishes. I really just wanted to enhance the shape of my eye and make it look more polished than a bare eye would be.

Do any of you have this palette? I don't think it's available anymore, but I am glad I snagged it when I had the chance!

Do you guys do "bare" natural eye looks very often? I tend to at least use eyeliner if I am going to do an eye that is this neutral, but because I had my heart set on wearing a bold red lip without looking too fussy, I left it out this time around.