I am slowly slowly going through my folders of unpublished pictures; I have a few fun things to show you coming up. I was really excited to post pictures of this polish, not because it's the most awesome thing I've ever seen, but because of how it came to me. Rock Star Skinny is a color from Essie's Fall 2008 collection. Yup, Fall 2008; it's four years old, and I only just purchased it. I found it at TJMaxx for $4, and what can I say? It spoke to me. It's described on Essie's website as a creamy crimson red, but it's more of a deep burgundy/berry shade, and it has the faintest hint of silver shimmer in it. Not nearly enough to make it a frost, but just enough to make it look a little bit velvety on the nail. It doesn't even really show up indoors, but it catches the light beautifully and provides an unexpected bit of shimmer in outdoors light. I always love finding beauty relics from the past like this, even if they're from the (relatively) near-past.

Do any of you have Rock Star Skinny? Did you purchase it when it first came out, or did you stumble upon it later, like I did?

Sorry about the nick on my ring finger... I must have dinged it before I took pictures, I did not even notice until I was going through them later and had already changed my nail polish! 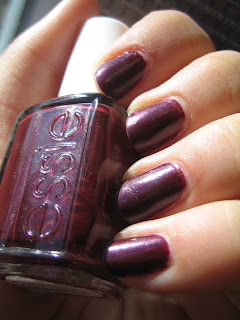 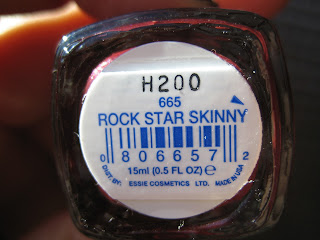 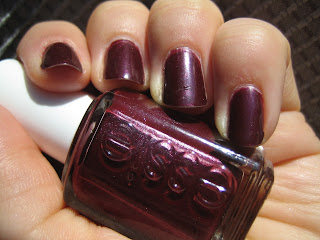 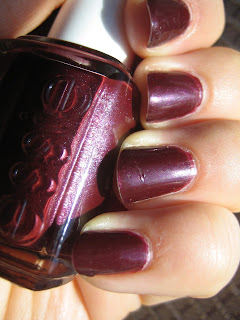 I highly recommend enlarging this last photo to get a better idea of the neat effect the hint of silver shimmer gives this shade. It's really beautiful!

So, what do you guys think? Would you go for a four year old nail polish? The formula on this was really easy to work with, and the color is lovely. I'm not sure about the name of the shade... Rock Star Skinny? It rubs me the wrong way, but I like the color enough that I don't really care.
Posted by Sarah at Tuesday, August 14, 2012