I went to Bed Bath & Beyond the other day and they had a bunch of new Spring displays out, plus I found a couple of Color Club shades that called to me... I ended up using three of my new polishes in the manicure I'm about to show you. It's not the type of manicure I generally go for, but I LOVE this combination! I don't ever want to take it off...

To do this manicure, I used a basecoat, two layers of Color Club's Wild Orchid (a slate blue/ periwinkle with silver, teal, and fuchsia shimmer), two layers of Color Club's Covered in Diamonds (iridescent flakies in a clear base), two layers of Revlon's Sheer Seafoam (a very sheer stormy teal), and a top coat. Too many layers? Maybe, but it was so worth it! Sheer Seafoam is really and truly VERY sheer, but I like how subtly it alters shades you put it on top of. I used to have a very sheer red top coat from L'Oreal that I had so much fun playing around with in the same way; in this manicure, it adds just a hint of milkiness on top of Covered in Diamonds, which keeps things from being too crazy. I'm going to go ahead and say that it classes things up, making this manicure look a little more expensive and refined than it did when Covered in Diamonds was allowed to shine at its full wattage. Is that a vague, unfounded statement? Yes. But it's my blog :) Which is the same excuse I am using for showing you gratuitous pictures of this mani:

That's my corset fabric in the background, FYI; I think I was crazy to put nail polish on top of silk, but it did not leak so I'm not sorry. Wild Orchid is a similar color, and I thought the fabric was too pretty not to show off just a little! 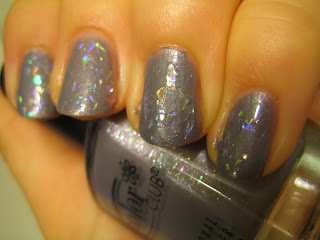 
And here's a picture that shows off the sparkle: 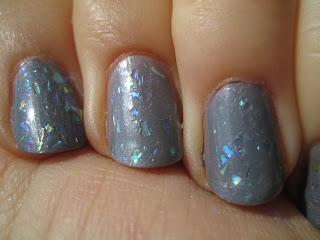 Summary: I haven't worked with these enough to feel comfortable giving a review, but I'm on my third day of this manicure with only one real chip, which is good for me! My initial impressions are that Wild Orchid is gorgeous on its own; Covered in Diamonds' flakes are a bit sparse, and Sheer Seafoam is VERY sheer; this is not a true "jelly" level opacity. That being said, I like the look of all three of these polishes, and I can see myself using these a lot in a bunch of different combinations.

What do you guys think? Do you like layering polishes, or do you tend to just wear one at a time? Have you hauled anything exciting recently? I picked up a couple of lip and eye products from the LE displays along with Sheer Seafoam, I'll be showing those off in the coming weeks...
Posted by Sarah at Wednesday, April 18, 2012